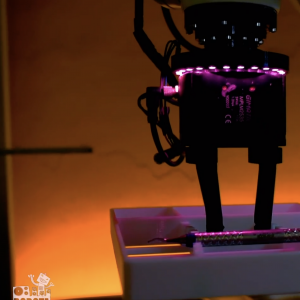 This new project was born from the idea of ​​a dentist living in Piemonte (northwest Italy) who, thanks to his skills in robotics, decided to design an automatic machine that could meet the cleaning and sterilization needs of the working tools that are used in his field. Robota steR; the first automated system in the world for a complete sterilization process, from the transport of the surgical instrument to the return of the same packaged and sterilized.

The idea of ​​using a Gimatic gripper derives from the evaluation of some fundamental aspects to make handling as lean as possible; such as mass, ease of use, stroke and robustness of the guides.

After careful analysis, the best solution has been identified in our Mechatronics catalog characterized by a PLUG & PLAY mechanism that allows the use of a gripper with a reasonable stroke (MPLM2535) as a unique gripping tool matching all the requests deriving from the application and yet significantly simplifying the programming task.

The goal was to have a single flexible gripper that could be used to manipulate tools, vertical grip empty trays or full loaded trays behaving like a fork relying exclusively on the robustness of its guides and with a simple ON / OFF command without hundreds of different opening, closing and force programs. All these combined features have allowed Gimatic to contribute to the creation of a new and ambitious project, Robota steR.

This site uses first or third-party technical and profiling cookies to manage and improve some site functions and to send commercial information about the Gimatic Group's products and services. By clicking on the “OK” key, you consent to the use of cookies. To learn more or disable some cookies, consult our Cookie Policy.

Cookies are small text files that the website sends to the visitor's terminal (generally the browser), where they are stored to be re-sent to the website at the next visit. Cookies cannot access any other data on the User's hard disk, nor transmit computer viruses. Every cookie is unique for the User's web browser. Some cookie functions can also be performed by other technologies. Cookies are used to improve the User's overall navigation experience. Specifically:

Cookies of this type are used to integrate third-party functions in the website (e.g. comment forms or social network icons allowing visitors to share the site's contents). Cookies in this category may be sent by the domains of partner sites, or sites which offer the functions included on the site.

The Data Controller is not required to request users' consent for technical cookies, since they are strictly necessary for the provision of the service.

For other types of cookies, Users may express their consent, in accordance with the relevant legislation, by means of specific browser, IT program or device settings easily and clearly usable for the User. The Data Controller reminds Users that their cookie preferences can be changed at any time. Cookies can also be disabled from the browser at any time, but this may prevent Users from using some parts of the Site.

With regard to the GDPR directive, and the measure containing Simplified procedures for information and consent concerning the use of cookies - 8 May 2014 (Published in Italian Official Journal no. 126 of 3 June 2014), users may decide how to manage cookies by modifying their browser settings (the procedure may vary slightly depending on the operating system used).