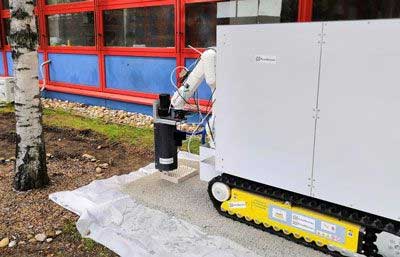 Tool changer in the 3D concrete printer for the building site of the future.

What would happen if: you could use individual concrete parts matching your wishes to build your home and also reduce CO2 at the same time? The Printstones start-up company knows how that can be done: Its mobile 3D printer enables individual concrete parts to be made directly on the building site. A tool-changing system from Gimatic that is well known in industrial automation provides the required flexibility.

The Printstones start-up company from Vienna has been addressing automation in the building trade since 2017. The focus is on the development of a 3D printing process for the automated manufacture of concrete objects on building sites that distinguishes itself through two unusual features. It is mobile and prints both concrete and other cement materials that are used on building sites. Conventional formwork panels are thus a thing of the past. Dr Herwig Hengl is the founder of the spin-off company of Vienna Technical University. It was about five years ago when he was working at the Institute for the Mechanics of Materials and Structures that he first came across additive manufacturing. “We came up with this idea when we were developing a simulation tool that can be used to analyse the tension and deformation of stressed parts. In order to verify the simulation results, the virtual components first had to be recreated and stressed. As this is a very costly and time-consuming process, we looked for a way to make the parts in an automated manner directly from 3D models”, the young entrepreneur recalls. Ideally, this should of course take place directly in the final place of use – the building site of the future. The Printstones founders’ business idea saw off 200 other start-up companies in a selection process of the INITS university incubator. The business model was then validated by qualitative and quantitative experiments and the development of the “Printstones X1” could be launched.

Potential application for one’s own needs

Gimatic Vertrieb GmbH supplies the tool-changing system for the 3D printer. People in Hechingen have always been open to unusual applications that are not necessarily mass applications. The director Johannes Lörcher even sees an application in this instance of use: “3D printing is becoming very popular and there are more and more reports about new developments in the building industry. I find the idea of printing building blocks great, although printing bricks is not yet possible because of regulations. But in our current new building in Hechingen we might very soon need to have a printer for the many paving stone surfaces“. Johannes Lörcher expects these applications to grow strongly in the non-industrial area through the further development of cobots.

One cubic metre of concrete with free geometry

The Printstones X1 is an early prototype of a mobile 3D printer for building sites. It can currently be used to print concrete elements up to a size of about 1 m3. The robot can be used both inside and outside. The robot makes conventional formwork unnecessary by precisely positioning and solidifying defined material volumes in successive layers using a computer-controlled positioning process. The 3D printing process consists of two general steps: 3D modelling and component printing. During path generation, different methods are implemented for generating robot trajectories. In general, each layer consists of an outer contour and a filling pattern that can take the form of honeycomb structures or space-filling curves. The material is prepared completely automatically via an upstream mini concrete plant. The recipe can be varied during the printing process in order for example to print highly stressed zones with firmer material. This technology can also be used to print building components from batch size 1 in variable forms.

As the founder puts it: “Gimatic was one of the first to appreciate the potential of Printstones and has supported us with tailored products”. At the moment, the Printstones X1 not only features the 3D printing nozzle but also another tool for measuring the substrate on which printing takes place. The tool changer is thus an important part of the system and is needed for fully automatic changes between the tools. “This application once again shows how handy it is to have a local contact”, Johannes Lörcher recalls. “After being initially contacted by Printstones, our technical advisor, Lars Janser from our Graz branch, visited this start-up company in Vienna, advised and convinced the young entrepreneurs. Our tool changer made things easier for him. The most compelling arguments were certainly the fact that it is very compact and is really simple to control.

The fully electric tool changer of the EQC75 type is suitable for change applications with payloads up to 10 kg. It is mainly used in handling and linear robots for industry that work mechatronically and completely dispense with pneumatics. As it measures just 75 x 145 x 60 mm, it weighs only 1.1 kg. In industry, it can therefore be fitted into the confined spaces of many small robots weighing up to 5 kg. The EQC75 is run by the tried and tested 24 V I/O control. Programming or additional control is not necessary. Its maximum torque is 150 Nm, maximum tensile force is 2000 N and the maximum payload is 10 kg. For users who do not want to make a complete changeover, it can be switched to electricity and pneumatic power because the change system has four air connections. It also has integrated sensors for position monitoring. The signal is transmitted via the main cable. The 24-pole plug and the 8-pole cable transmit the sensor signals and supply the power. The ISO 9409-1-certified compatible adapter supplied also enables products of other manufacturers to be connected. Retrofitting is no problem either.

“After water, concrete is the material that is most used by people, but using it comes at a high price. Concrete is responsible for about eight percent of worldwide CO2 emissions”, Dr Hengl points out. “Air travel’s 2.6 percent contribution to CO2 emissions is thus comparatively low. So our goal needs to be cutting cement consumption wherever possible. Concrete 3D printing enables zones of a building component that are not greatly stressed to be excluded so that material is saved“. The system is designed as a multi-tool device. The concrete 3D printing nozzle is thus one of many possible tools. Further tools will be developed in joint development projects with future users and customers. “We are first and foremost active in R&D and try to get future customers as fully involved as possible. We work only with local partners like architects’ studios, industrial designers, builders and building companies. We still need to do some pioneering work in the last group, because the building industry, which makes up about seven percent of the world market, invests a lot less in R&D than do other industries on average”, comments Herwig Hengl.

“Our vision – or should I say mission?- is automating and optimizing building processes. We want to cut down on monotonous work on building sites with our technology and make life easier for workers on building sites. One good example is laying paving stones. Nobody enjoys spending 8 hours a day on their knees laying paving stones. Herwig Hengl points out one of the possible applications: “With the mobile 3D printer, these stones can be printed directly on the upper load-bearing layer of the road – laying is no longer needed”. Printstones currently implements pilot building projects. Within five years, the start-up company wants to have changed into a system provider. Preparing hardware, software and in particular building materials is the future objective. The Viennese company feels that this partnership will enable Gimatic grippers to be used in their building site robots. They can for example imagine them being used to install reinforcing elements or other integrated components. At Gimatic, the application is just one of a series of other exciting applications. So in the future, not only will strawberries be picked and snails collected in agribusiness as an alternative programme but also concrete parts will be gripped securely, reliably and efficiently.

This site uses first or third-party technical and profiling cookies to manage and improve some site functions and to send commercial information about the Gimatic Group's products and services. By clicking on the “OK” key, you consent to the use of cookies. To learn more or disable some cookies, consult our Cookie Policy.

Cookies are small text files that the website sends to the visitor's terminal (generally the browser), where they are stored to be re-sent to the website at the next visit. Cookies cannot access any other data on the User's hard disk, nor transmit computer viruses. Every cookie is unique for the User's web browser. Some cookie functions can also be performed by other technologies. Cookies are used to improve the User's overall navigation experience. Specifically:

Cookies of this type are used to integrate third-party functions in the website (e.g. comment forms or social network icons allowing visitors to share the site's contents). Cookies in this category may be sent by the domains of partner sites, or sites which offer the functions included on the site.

The Data Controller is not required to request users' consent for technical cookies, since they are strictly necessary for the provision of the service.

For other types of cookies, Users may express their consent, in accordance with the relevant legislation, by means of specific browser, IT program or device settings easily and clearly usable for the User. The Data Controller reminds Users that their cookie preferences can be changed at any time. Cookies can also be disabled from the browser at any time, but this may prevent Users from using some parts of the Site.

With regard to the GDPR directive, and the measure containing Simplified procedures for information and consent concerning the use of cookies - 8 May 2014 (Published in Italian Official Journal no. 126 of 3 June 2014), users may decide how to manage cookies by modifying their browser settings (the procedure may vary slightly depending on the operating system used).